Campaign to preserve the history of our Town

In January 2019, Easttown Township appointed a Task Force to consider a vision for the Devon area and propose any necessary zoning amendments.

Throughout that process, an outside “planning consultant” hired by the township pushed a series of pro-development amendments:

Through the efforts of neighbors and members of the task force, these amendments were overturned and not recommended by the “Devon Task Force”.

Despite this, at the subsequent Planning Commission meetings, the consultant along with Commission members are pushing the changes that the task force determined were not in the interests of or supported by local residents.

The fight continues to oppose these proposals….

The only one to benefit from these proposals is a developer who submitted a plan for a Large Apartment Building, Mall, and 3-Story Parking Garage

Not only did the Devon Center Task Force not endorse the proposed plans, it’s only supporter is a developer who submitted a plan to convert the area into a large apartment complex, mall, and parking garage. Without the proposed zoning changes put forth by the developer and “consultant”, this project could not be built. If the zoning changes are adopted, this type of King of Prussia apartment complex could be built along Rt. 30. 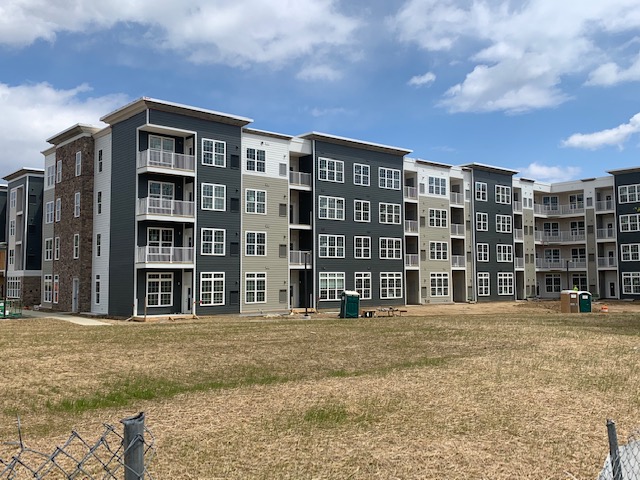 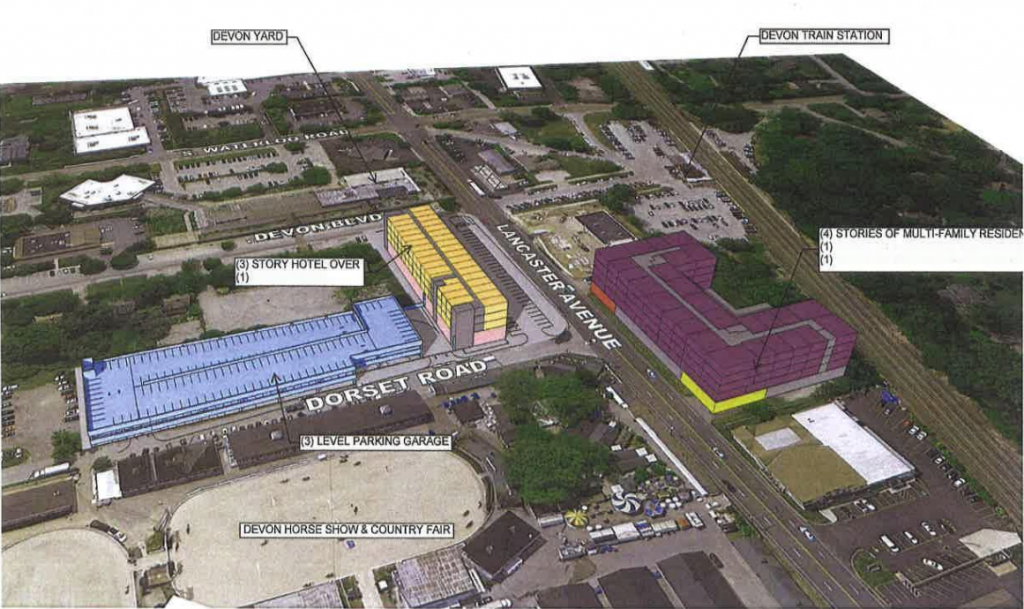 Developer’s rendering of proposed changes to the area.

The Devon Center Task Force recommended that the Horse Show properties NOT be rezoned for general commercial use. The Horse Show Foundation itself is not seeking any commercial rezoning of the fairgrounds but only asks that it be designated for “Equestrian Use” as it has been used for 100 years. We support the Horse Show’s request. However, the consultant is advocating for a general rezoning of those properties which would allow for a host of commercial uses by a developer in the future, and allow a large unsightly parking garage on Dorset Road. None of this was endorsed by the Task Force.

Repealing the longstanding limit on the "unit density" of any multi-family building in Easttown from 8 units per acre, to one that would allow 50 or more units per acre

Coupled with the other proposals, this change would allow for the construction of 50, 70, and 100+ unit apartments along Route 30 in Devon. A similar repeal of the 8 unit limit occurred for Berwyn in 2013, triggering a proposal for a 120 unit, 5 floor apartment building with a 210 car parking garage in Berwyn on 1.7 acres. That is 70 units PER ACRE! 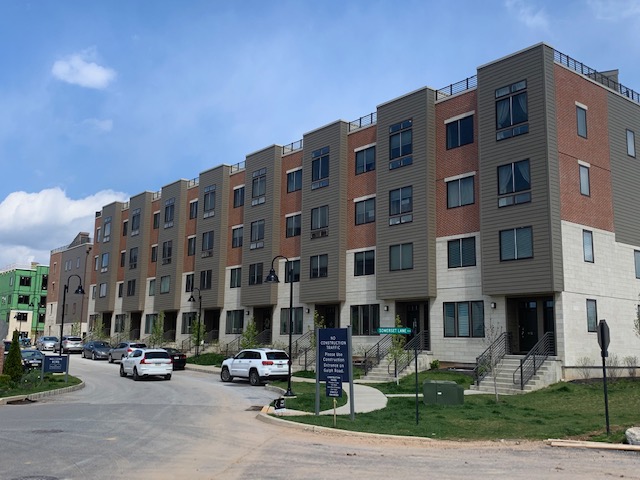 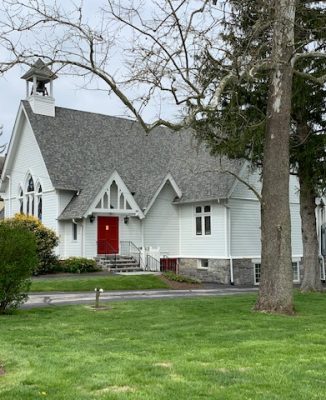 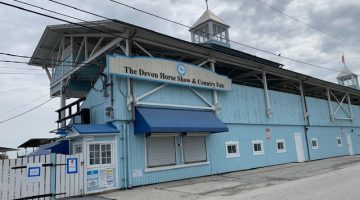 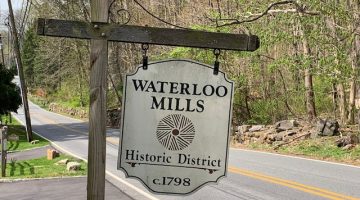 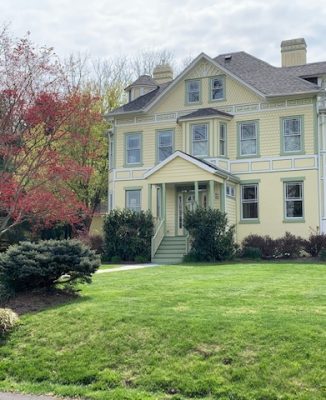 In January 2019, Easttown Township appointed a “Task Force” to consider a vision for the Devon area. The Task Force conducted a public input process through an online questionnaire and a public workshop. Many of us actively participated in the process and attended the meetings of the Task Force.

The results of the public input process overwhelmingly support our positions in opposition to changing the zoning in Devon to allow for high density apartment buildings, or to rezone residential properties for commercial use. The public is clearly opposed to high-rise, high-density apartments. The public does not want parking garages or hotels in Devon. The public supports maintaining a “country, green” feel to Devon.

Despite the clear result of the public input process, the outside consultant hired by the township, Lisa Thomas of the firm, Glackin Thomas Panzak, pushed for numerous pro-development zoning amendments. These amendments would benefit the one developer who had proposed a large apartment building, hotel, and three-story parking garage in Devon next to the horse show grounds. It was revealed after a public complaint and an investigation by the township that the developer who has made this proposal for Devon is a former client of the Glackin Thomas Panzak firm.

The consultant made other destructive proposals including rezoning the entire horse show fair grounds for various commercial uses, rezoning for commercial use the St. John’s Church property on Berkley Road which is currently in a residential district, raising building heights to 50 feet from the current 35-foot limit, and to increase allowable impervious cover from 65 to 85 percent.

Through the efforts of the public and the citizen members of the Task Force, most of Glackin Thomas Panzak’s efforts to hijack the Devon Task Force process were rejected.  The Task Force did not recommend rezoning the horse show properties for commercial use or a parking garage. 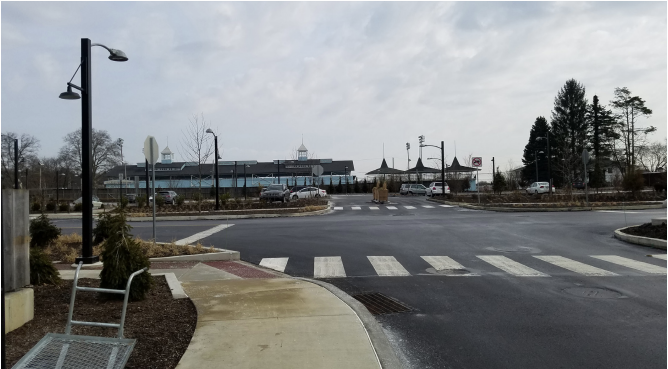 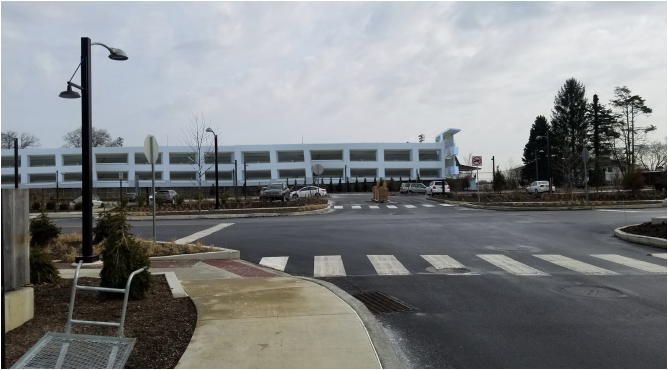 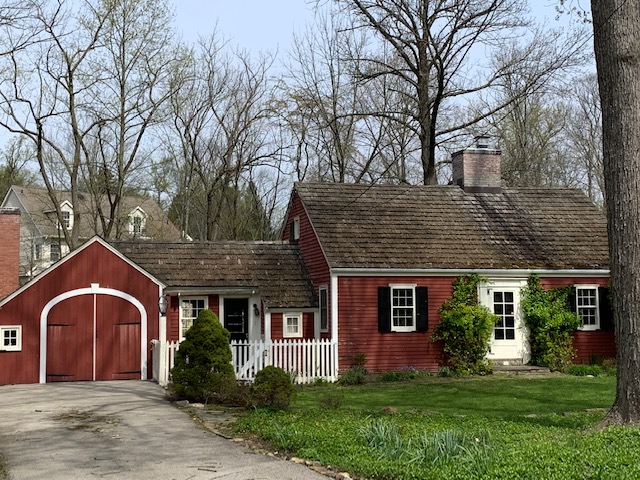 The Task Force issued a “Vision Statement” for Devon which is consistent with the public input and the Comprehensive Plan’s goals of preserving the existing heritage, architecture, and character of Devon. (Click here for the Devon Vision Statement).

In September 2019, the Planning Commission was supposed to take up the Task Force recommendations. Instead, Ms. Thomas presented her pro-development proposals again as though they had not been rejected by the Task Force. These proposals disrespected and ignored the public input, and were in many cases in violation of the 2018 Comprehensive Plan.

It was also revealed that Ms. Thomas intended to push for adoption of a drastic change in the township’s zoning to completely repeal the longstanding “8-units per acre limitation on multi-family developments”. In its place, there would be no specific unit limitation. The only limits would be the height of the building, the allowed impervious cover, and other limits on a property. This dangerous change would allow for buildings with 40, 50, or more units per acre, precisely the kind of development her former client builds and previously proposed in Devon. We want to emphasize the 8-unit repeal was never properly raised, discussed, or vetted, and certainly was never recommended by the Devon Task Force. The consultant tried to sneak this through under the radar. Unfortunately, the Planning Commission members do not seem to be at all concerned with this and appear to support the proposal to repeal the 8-unit limit and allow the 50-unit per acre buildings to be built. 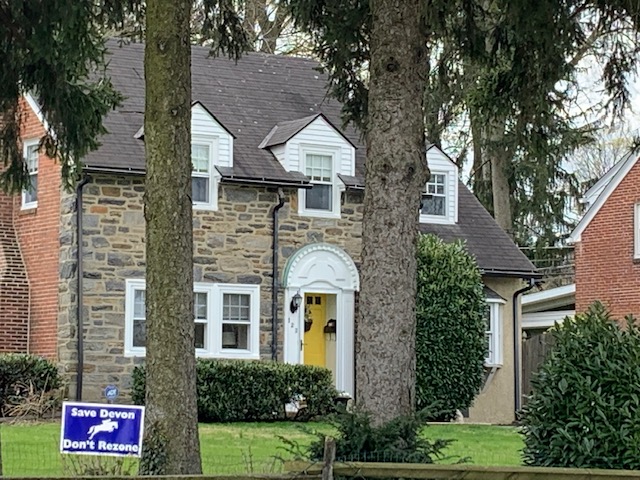 The consultant also has continued to promote rezoning the open lot on Dorset Road, owned by the horse show and used for parking during the shows, from a residential to a commercial district. The open lot provides an effective buffer to the residential neighborhood and provides open space 330 days a year. The developer (her former client) has proposed a three story, 400-car parking garage for the Dorset Road lot.

Unfortunately, the appointed members of the Planning Commission appear to support these drastic proposals, which will change Devon for the worse. The current version of their zoning amendments would repeal the 8-unit density limit, and rezone the Dorset Road lot for the garage use.

The Planning Commission has announced that it will take up the Devon project again in September at a virtual meeting.  We have asked that no further meetings be held on this project until they can be safely conducted at a public meeting. We also think it foolish for the township to make drastic zoning changes with so much economic and public health uncertainty as a result of the COVID-19 virus. 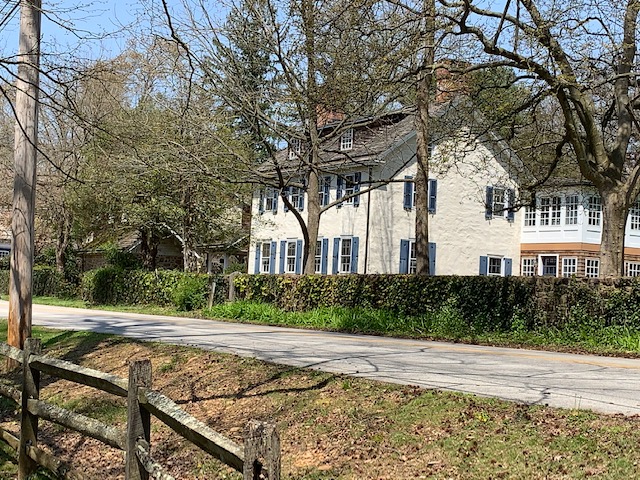 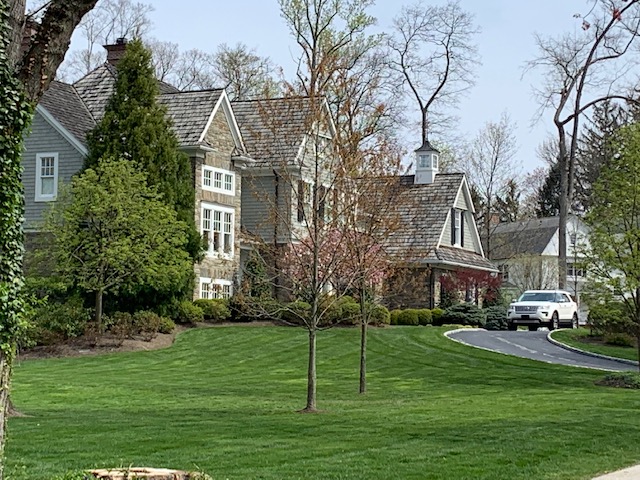 We ask you to join us to: